Release 3.8 - November 2020 - Updated OESRC section - Added DOE Attachment C question (when the sponsor or prime sponsor has the DOE-FI keyword) - Moved OESRC Requirement into an OESRC question related to Export Control and/or Classified Data - Removed the "Does the research have a commercial end use application?" question 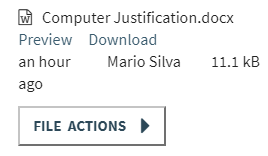 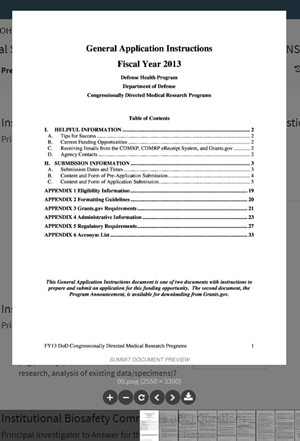 Release 3.4 - July 2020 - COI Question will now require a comment if answered "Yes". - The proposal will give an error message at the bottom right of the screen if the user tries to submit for routing with a "Yes" answer and no comment.

Release 3.1 - May 2020 - Proposals - Added "Research.gov" option to Intended Submission Method and Actual Submission Method in Proposal Editor - Agreements NDA Beta - Allow removing of a linked proposal - Ability to make a comment when closing a task associated with an agreement - Filter Tasks by Task Type and allow the filtering to be saved by the user - UI improvements

Release 2.23 - December 2019 - Updates to the Login Authentication System that will enable better integration with other OSP systems and seamless Summit deployments. 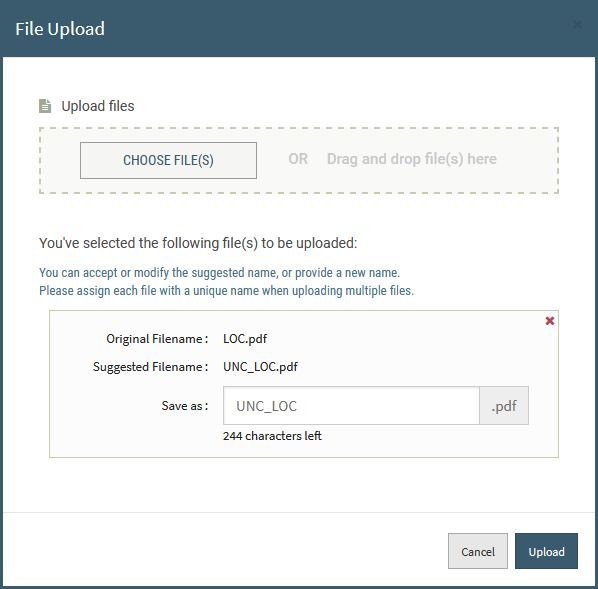 Now when users revise a Proposal, Supplement, or Continuation; the work item will stay as 1 entity. Creating a revision will not create a 2nd independent work item, as was done before. The process for Pre-Proposals, LOIs, and White Papers will continue as before and stay separate entities.

This new process will only be for revisions made going forward, older revisions will stay separated and only visible linkage accessible in the History.

All new revisions for the work item will be accessible from a new folder in the toolbar while in a particular work item.

While in the Revisions folder, users will be able to click through all revisions and the current work item 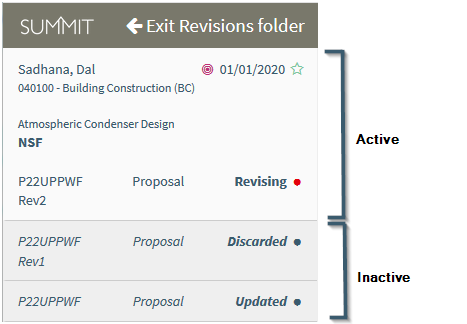 There will only be 1 active work item at a time and will display with a normal summary pane box. 2 inactive statuses can be seen on various past works, but all work items displayed will be accessible f clicked.

When clicked it will bring up the work item. To get back to the normal view of Summit, click "Exit Revisions folder" in the top left. For more information, click here.

A user can revise a work item by clicking it in the summary pane and click "Actions", then "Revise". The action is only available if the work item is in the Pending Decision status. 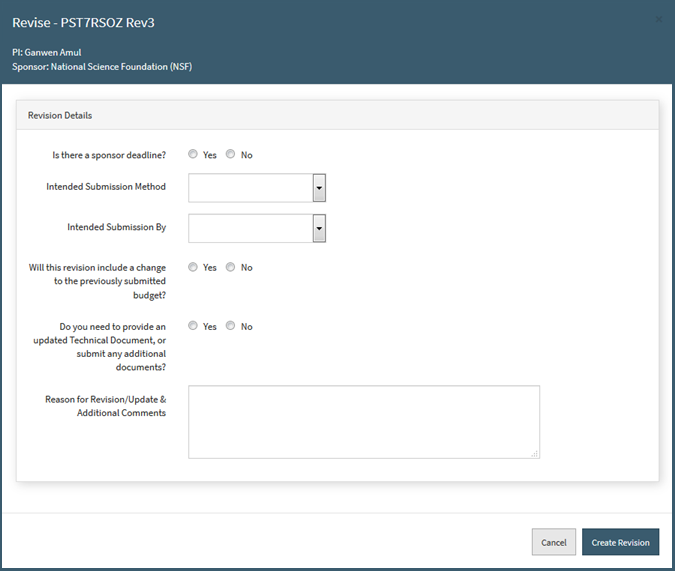 Users can also get to this revise modal through Get Started (located at the top left of Summit). 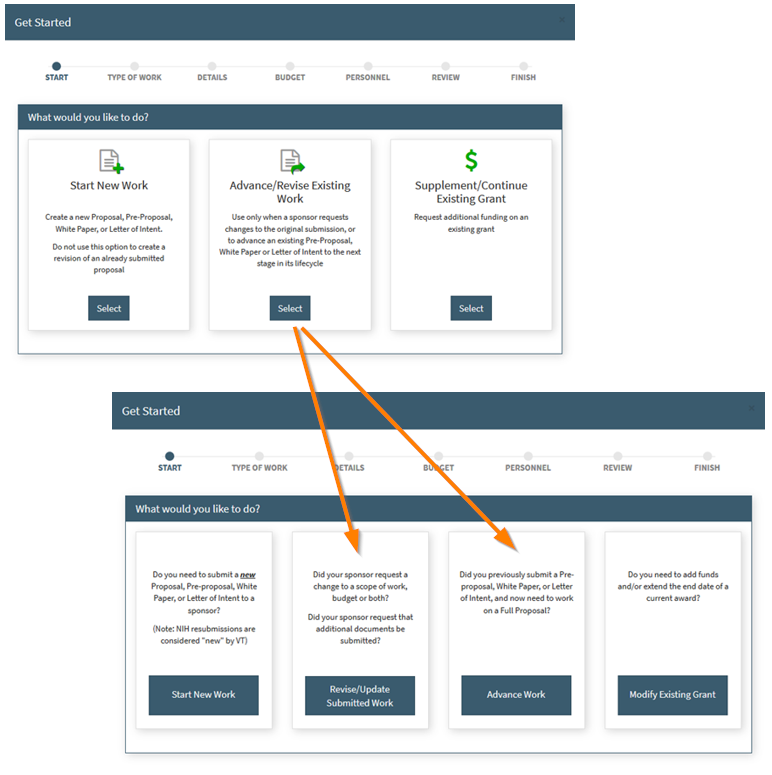 What was the middle box has now been split into 2 separate selections. Selecting the 2nd box now and a user puts in an ID for a Proposal, Supplement, or Continuation that is in Pending Decision, it will bring up the same revision modal.

Once created, the revised work item will be placed back into the Open folder, with the new status of "Revising". The original work item ID will remain, but "Rev" followed by the number of the revision will display.

From there the work can progress through the same stages as a new work item (Revising, In Routing, Approved, Submitted) then to get back to Pending Decision to wait for communication from the sponsor. And either repeat the process again or go to a Closed status. 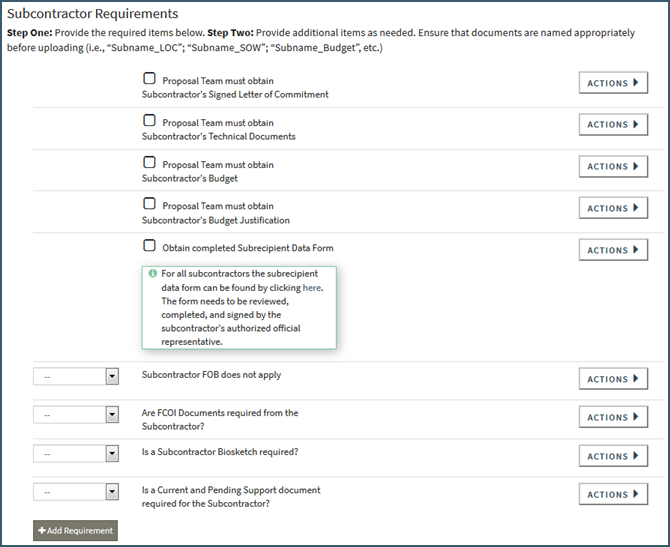 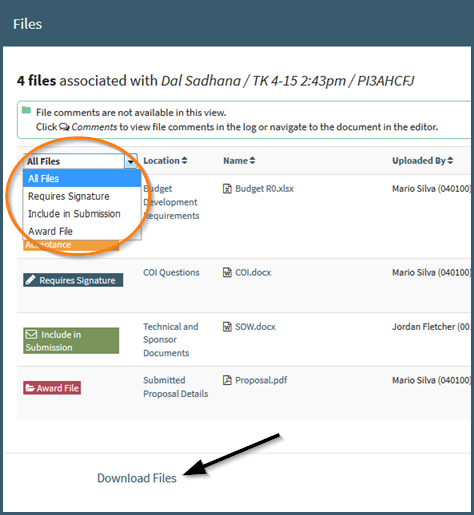 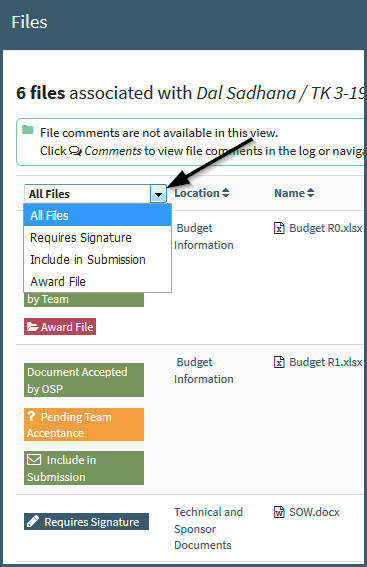 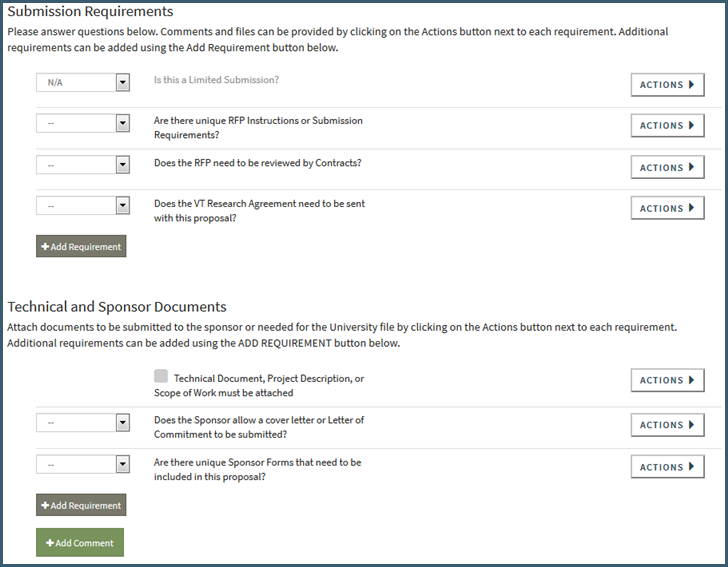 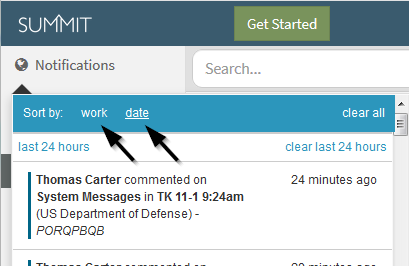 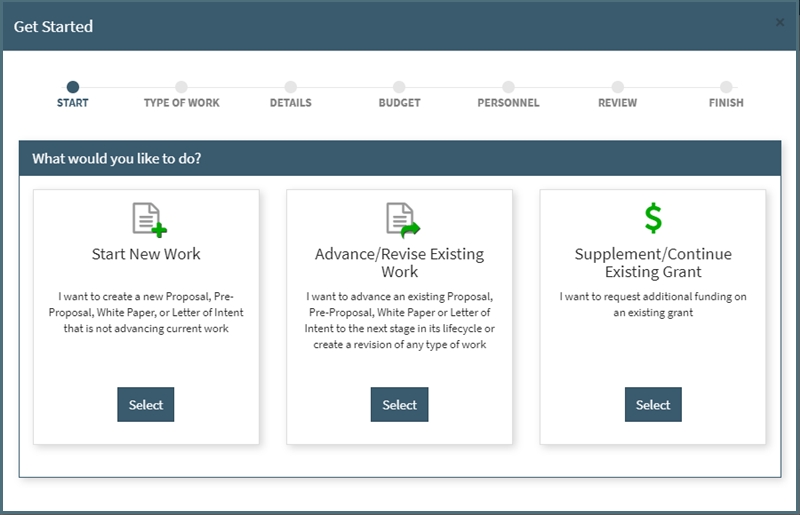 Get Started will have all 3 options as seen above 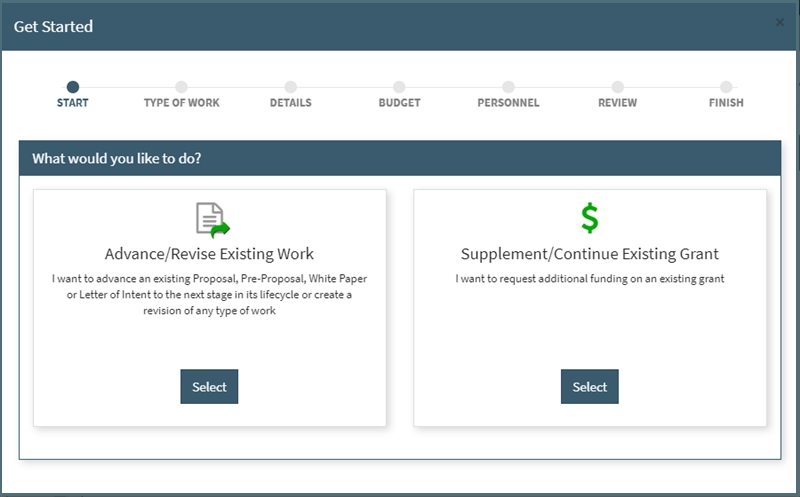 Advance from within a proposal and you will see the same options as you do in the Get Started, except "Start New Work".

3. Types of Work updated We have removed "Revision" and "Other" as a Types of Work. For "Revision", you are now able to revise to the Type of Work you're are advancing from (ex. "Proposal" to "Proposal"). For "Other", you can specify if it is a "Supplement" or "Continuation". This brings the current Type of Works that can be used in Summit as: White Paper, Letter of Intent, Pre-Proposal, Proposal, Supplement, Continuation

4. History Log Users will now have the ability to view a list of all Types of Work that have been linked to each other via the advance feature.

Below shows the display in Summit when a user clicks "History". Sorted by creation date, the earliest work will be at the bottom and most recent created at the top. All types of work in that cycle can be accessed from another other work while having the History display up, simply click the hyperlink of the Proposal ID. 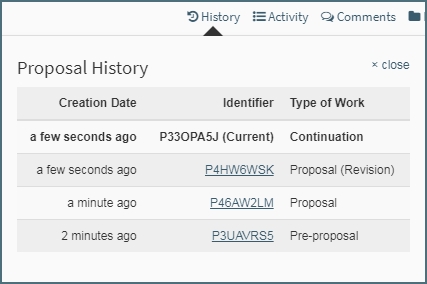 5. Minor Updates
- Compliance questions updated (OESRC and IRB) - Newly created proposals will only have the new questions. - All existing proposals will have the new OESRC questions added alongside the older ones.
- Before a proposal can be routed, the new questions will need to be answered by PI/Proposal team.
- Proposals already In-Routing or Approved will have those questions added as well but they will NOT be needed to be answered to get the proposal to next status level. - Year Displayed in the Proposal Summary if not current year - CDA/NDA requirement question added in the Submission Information section - Various Bug Fixes - Increased proposal summary pane width (Updated view shown below)